In addition to the 367 researchers from 52 countries that worked at IIASA in 2020, the institute has an extensive network of collaborators, alumni, and visitors from across the globe.

advisory boards and steering committees that include IIASA researchers

externally funded projects where IIASA was lead or partner

In September 2020, IIASA organized a session on science diplomacy at the EuroScience Open Forum (ESOF2020). The session aimed to introduce the Big Research Infrastructures for Diplomacy and Global Engagement through Science (BRIDGES) network to the wider science diplomacy community and to discuss emerging issues. Among the speakers at the session were the Director General of IIASA, the Director of The Abdus Salam International Centre for Theoretical Physics (ICTP), representatives of the European Molecular Biology Laboratory (EMBL), the European Commission Joint Research Centre (JRC), and the European Organization for Nuclear Research (CERN).

In November 2020 IIASA, in its capacity as secretariat of the BRIDGES network, organized a virtual Third BRIDGES Meeting. Representative of the European Southern Observatory (ESO) participated in the meeting for the first time, thus bringing the number of BRIDGES members to twelve. The current members are: ICTP, JRC, EMBL, CERN, the European Southern Observatory (ESO), the European Space Agency (ESA), European XFEL GmbH, IIASA, the International Thermonuclear Experimental Reactor (ITER) Organization, The World Academy of Sciences (TWAS), the Square Kilometre Array Organisation (SKAO), and Synchrotron-light for Experimental Science and Applications in the Middle East (SESAME). Among the topics discussed during the meeting were the readiness, willingness, and preparedness of the scientific community to actively engage in building bridges between policy, science, and diplomacy, as well as policies on open access to scientific knowledge. The meeting helped to identify ways on how to move forward.

Despite the restrictions brought about by the COVID19 pandemic, 98 visitors came to IIASA to do research, collaborate with the institute’s research programs, and attend IIASA events. Of these visitors, 79 were from member countries.

IIASA scientists hosted or coordinated 74 events worldwide. The majority of these events took place virtually due to the COVID-19 pandemic. The events were attended by a total of 1,218 participants, of which 593 were identified as coming from member countries.

IIASA has 4,337 alumni from 100 countries, of whom 25% are actively involved in the institute’s scientific activities and many are leaders in academia, government, and the private sector. The Alumni Association coordinates exchange within this network.

The institute provides a range of incentives, as well as structures, for international research collaboration and encourages the mobility of global scientific talent. As IIASA gives preference to researchers from its member countries in research and capacity-building activities, membership of IIASA provides many new opportunities for scientists at all career levels.

In 2020, Melissa Caldeira Brant de Souza Lima was an IIASA guest research assistant and a PhD student at the Vienna University of Economics and Business, Austria.

Samir K.C. was a researcher with the IIASA World Population Program and a professor at the Asian Demographic Research Centre, Shanghai University, China.

Junko Mochizuki was a researcher with the IIASA Risk and Resilience and Water programs and a Disaster Risk Management Specialist at the World Bank.

Benigna Boza-Kiss was a research assistant with the IIASA Transitions to New Technologies Program and held a research position at the Central European University, Hungary. 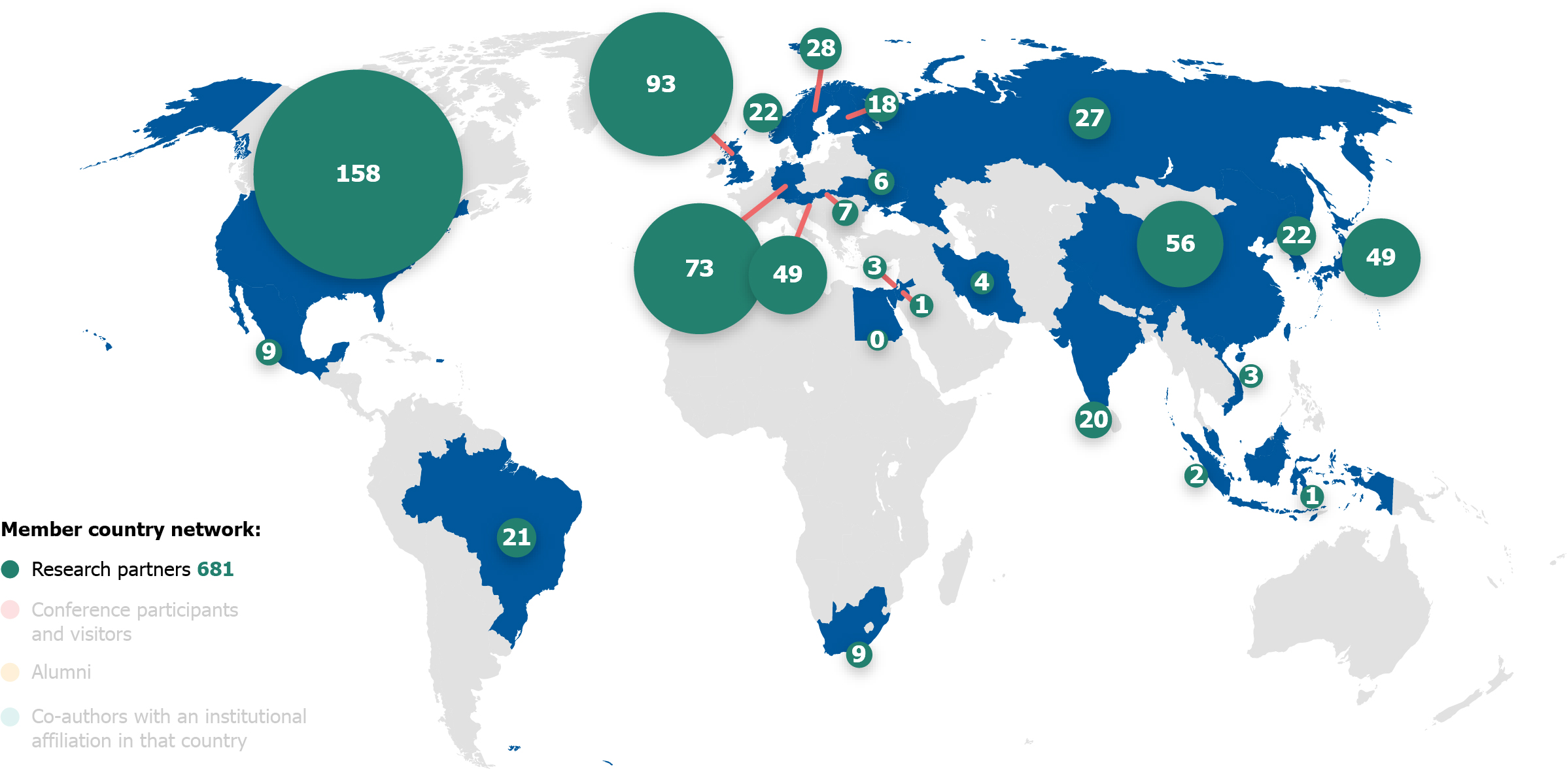 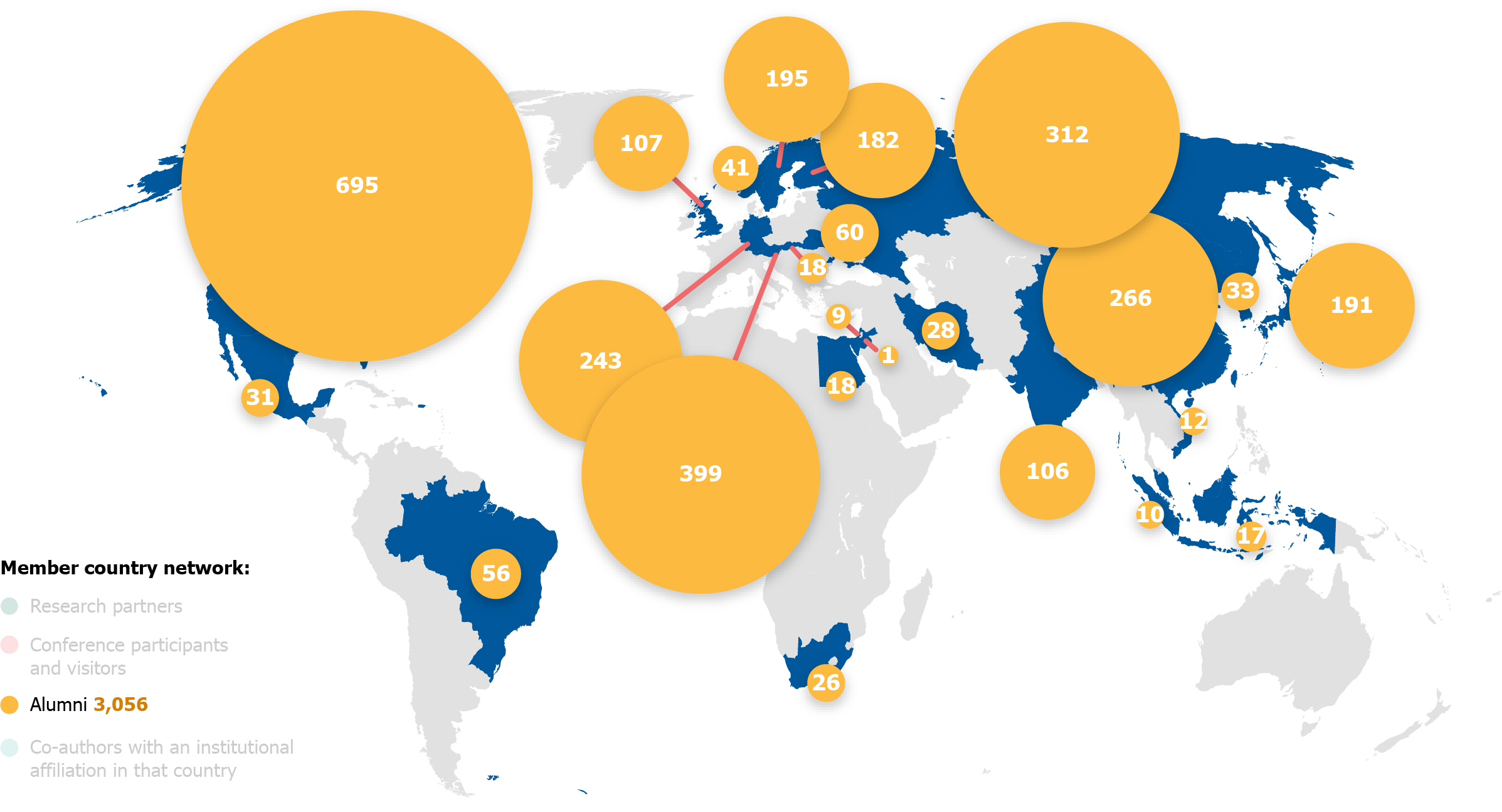 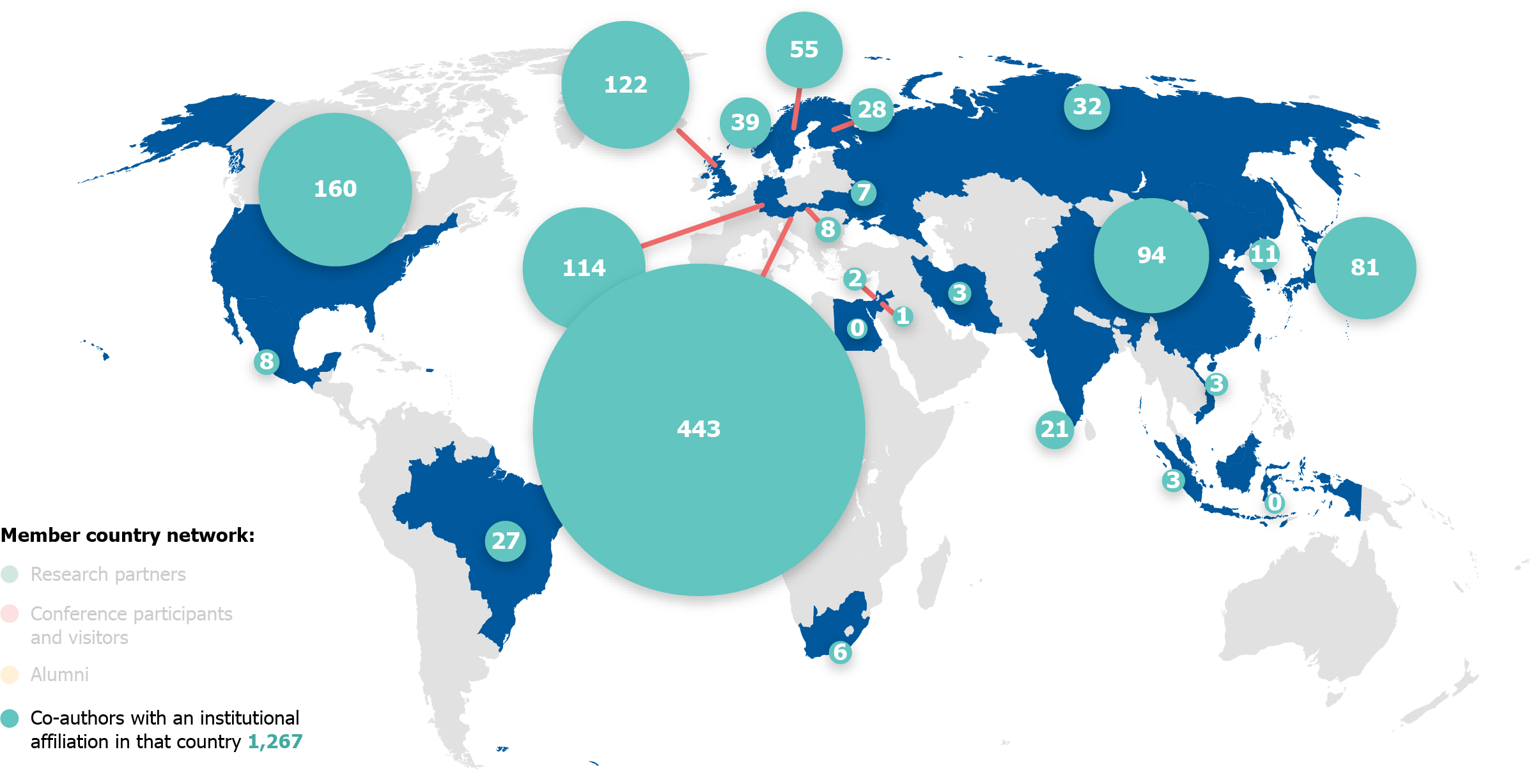 In 2020, IIASA continued to prioritize partnerships with research collaborators and research users in its 22 member countries. These partnerships include formal collaborations between institutions as co-investigators on externally funded research projects, and informal cooperation between individual researchers working together on scientific publications.

In addition, IIASA signed Memoranda of Understanding with 17 organizations to facilitate research collaborations and the use of IIASA research by institutions in a number of countries, including Austria, Brazil, China, India, Russia, the UK, and the US, along with international organizations such as the United Nations Convention to Combat Desertification (UNCCD). In 2020, IIASA also became a founding partner of an initiative to organize the International Year of Basic Sciences for Sustainable Development in 2022 and to have it proclaimed as such by the UN General Assembly.

Established strategic partnerships were also progressed in 2020. Among these were:

In 2020, IIASA researchers served on 224 advisory boards and steering committees. These ranged from the World Health Organization’s (WHO) Air Pollution and Health Scientific Advisory Group to the International Boreal Forest Research Association and the World Water Council. A total of 20 IIASA researchers contributed to the Intergovernmental Panel on Climate Change’s (IPCC) Sixth Assessment Report, which is currently under preparation and scheduled to be finalized in 2021. Notably, IIASA emeritus research scholar Nebojsa Nakicenovic was appointed to the Group of Chief Scientific Advisors to the European Commission.

In addition, IIASA researchers made research contributions to the global programs of multiple international organizations. For example, a World Bank report on tackling the growing challenge of urban air pollution, a Department of Economic and Social Affairs of the United Nations (UNDESA) report on effective institutions to support sustainable development, and a United Nations Economic Commission for Europe (UNECE) report on accelerating the energy transition in the UNECE Region—all used IIASA research