In the last decade, floods have affected more people than any other type of disaster. IIASA researchers are working to strengthen the scientific basis for building disaster and climate resilience worldwide. 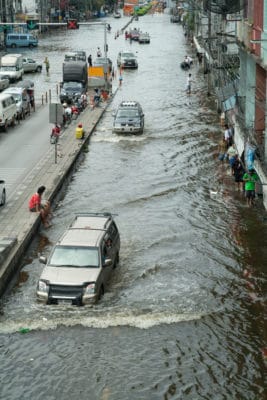 Sea level rise is one of the most severe impacts of climate change, threatening coastal communities, infrastructure, and agriculture. In 2020, IIASA-led research for the first time assessed the economy-wide effects of sea level rise globally, and in particular in G20 countries.

The findings show that global GDP losses up to 2050 in a scenario where warming is kept well below 2°C, as well as in a second one overshooting this target, are significant and similar given the effects of climate change already being experienced. Without further mitigation and adaptation, and assuming continued sea level rise, projected annual global economy-wide losses can amount to more than 4% by 2100. With ambitious mitigation and adaptation, the model results however show that this number can be reduced to below 0.5% of global GDP loss while accounting for the associated costs for adaptation measures and residual impacts. The results strongly argue for countries to further coordinate mitigation, adaptation, and climate resilient development, and consider where to build cities and situate important infrastructure.

Standardized measures of resilience that are applicable across geographical and socioeconomic contexts are however not always readily available. To this end, IIASA researchers developed a standardized community resilience measurement framework for flooding, as well as a corresponding measurement tool modeled on and adapted from a so-called ‘technical risk grading’ approach. These tools can inform the way forward for better, more efficient, and increasingly robust standardized assessments of resilience to track progress and inform the implementation of the Paris Agreement, the Sendai Framework, and the Sustainable Development Goals.

To better understand community-level flood resilience, researchers also developed a typology of community flood resilience capacity based on community characteristics and five capitals (human, financial, natural, physical, and social). Their findings have important policy implications on the individual community level. The results, for instance, suggest that communities with lower flood resilience capacities and interactions can best build resilience by leveraging their relatively higher human capital capacities to strengthen their financial and social capitals. The study however also indicates that negative effects might occur in urban communities when co-benefits of natural and physical capital are not fully integrated. This emphasizes the importance of an integrative approach to management when implementing systematic flood disaster resilience metrics and development measures.